NGE received the first batch of 35,000 rails on Monday 24 February.

This key milestone in any rail engineering project was welcomed by a visit from Victor Rossi who, as the Minister of Transport and Public Works, signed the concession contract on behalf of the Republic of Uruguay 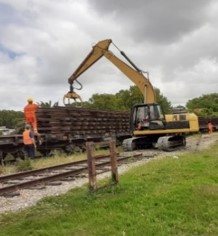 The Ferrocarril Central project led by concessionaire NGE working alongside two Uruguayan companies – SACEEM and BERKES – and the Spanish company SACYR aims to build a 266-km rail link between the capital Montevideo and the largest pulp mill operated by Finnish corporate group UPM.

The international teams of NGE responsible for carrying out this work have been on-site since June last year. Almost all the existing track has now been dismantled. Earthworks are already underway on several sections. The first batch of rails received on 24 February is now on its way to Florida, a city ideally located along the line of the new rail link, where the welding plant will be installed.

Download the press release
37,000
18m rails to be laid
153
rail bridges
4
large-scale metal bridges
8 million
m3 of earthworks
30
road bridges
Back to the list
We use cookies to ensure that we give you the best experience on our website. If you continue to use this site we will assume that you are happy with it.OkNo